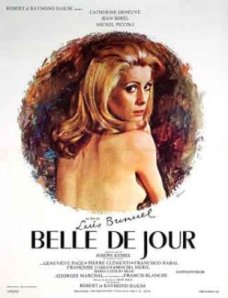 In 1998, as part of my Film Critic course in university, I watched the movie Belle de Jour. The French movie was directed by Luis Buñuel in 1967. Given the almost 20 years gap between the time the movie was filmed and the time I watched it, I did not expect the movie to shock me as it did.

In short the movie is about the frigid wife (Séverine Serizy) of a young and attractive doctor (Pierre Serizy). He is understanding of her inability to be sexually intimate with him. He loves her nonetheless and they live a chaste life. However Séverine has masochistic sexual fantasies, which she fulfils by working as a prostitute during the day. Her work name is Belle de Jour. Things take a turn for the worse when a family friend finds out her secret, as he unknowingly visits the brothel where she works. Another complication occurs when a gangster (Marcel) falls in love with her and wants her all for himself. Séverine decides to call it quits but Marcel turns up at her house and threatens to tell her husband. Then Pierre gets shot by Marcel and when he tries to escape, Marcel is killed by the police. Pierre is blinded and sits in a wheelchair at their home, as the family friend visits him. Séverine is afraid that he would disclose her secret. The final scene shows the happy couple standing in front of the window, looking happy and in love. It is not clear if it is a flashback or shows the future.

Then I was appalled by Séverine’s behaviour. I could not understand her motive. My harsh judgement of her was influenced by my conservative upbringing. Growing up in Asia and in an Indian family, I had a different image of what being a woman entails. The role of a woman was clearly to serve her family. My mom first taught me how to cook at the age of 8 because girls have to cook for their husbands and children. Who would want to marry someone, who cannot cook? (She has changed her views since then. My sisters were not very interested in cooking.) Sexual promiscuity was expected of men but women were to remain loyal to their husbands. As I mentioned, I could not understand her motives. After all she had a wealthy and good looking husband, who adored her. Wasn’t it every girl’s dream? Why did she risk it all for sexual pleasure? To sum it up, I hated the character Séverine. I wondered, if “white” women were as immoral in reality.

More than a decade later, I view the character differently. I still do not condone Séverine’s behaviour because they do not fit with my moral notions but not because she is a woman. She could have tried to fulfil her fantasies within the confines of marriage. I no longer judge her as harshly as the 20 year me had. I see her as being a victim of societal expectations of what a woman is. She was expected to be a sweet and loving wife and enjoy “normal” sex. She must have felt that her fantasies were an expression of her freakish nature. She was abnormal and the only way she could dare to fulfil her fantasy was by becoming another person; a person outside of society’s constraints. Belle de Jour is a prostitute, society expects her to do wild sexual things because that prostitutes are amoral. She is able to be herself without feeling guilty about disappointing other people. Of course, it is only a temporary freedom. Reality catches up with her soon enough.

What is the moral of the story for me? Every person is a complex being and gender characteristics only complicate the process of getting to know ourselves and of the way we tick. The whole men are from Mars and women are from Venus notion is nonsense. Women like Kate Gosselin would drive me crazy, if I were stuck on Venus with them. Likewise I would start a new colony on a new planet any time with women like me and men like Mr. M – a planet free from gender traits and characteristics.

Would I ever experience a world where we can be ourselves without gender expectations influencing our behaviour and role in society?

4 thoughts on “Belle de Jour – A strong female or a dispaired soul?”